My name is Mark Miatello. You pronounce it just how it looks.  Mark.  No, I mean Miatello. Mee-ah-tell-oh. Pretty simple. 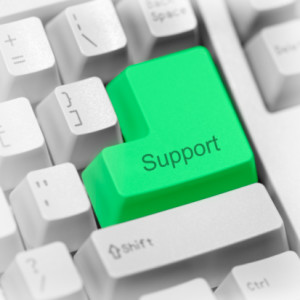 I’ve been with FrontRunner Professional going on four years and it was decided that I should share some of my accumulated wisdom with you so that’s why you’re reading this.

When it comes to our funeral home software, I’ve seen almost every possible issue and usually numerous times…too numerous to count. Every one of our clients has been a newbie at one time. You may be one of the new ones and are a little overwhelmed with all the features available in the system and where to go to do what. You may be one of our long-time clients and know all there is to know about the IMS until that one day when you are sitting there thinking, “How do I do that again?”  Hopefully, I can be of assistance with some of the main things that you’re going to run into.

The first thing you have to remember and never, ever forget is that computers are stupid! That may sound a little harsh but it’s true. They always do exactly what they’re told. They never question or think, “Oh, I think what they really meant for me to do is this instead.” Nope, they just do exactly what you tell them to. They’re kind of like that kid in grade school who did what everyone told him or her to do. “Hey Dougie – eat that piece of green bologna.” And he would. “Hey Shirley, jump in the lake and see if the water’s cold…right after we cut a hole in the ice.” Of course she would. Computers are the same. Tell them to eat the green bologna and they’re all over it. Yummy! 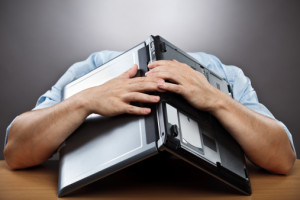 One of the things I hear about on a regular basis is the ‘disappearing record.’ I have never seen a record disappear, ever, but I sure have had a lot of calls about them. The one event I remember vividly happened a couple of years back. It was late on a Saturday night. I received a call from a very frantic funeral director who had been up and going for almost 48 hours. He claimed to have added a new record and as soon as he hit save, the record disappeared! He had added it numerous times and after the fourth or fifth attempt, he was no longer selecting ‘Save.’ He was, in his words, repeatedly STABBING THAT DAMN SAVE BUTTON but the record kept disappearing. Now that I think about it, frantic doesn’t truly describe his state of mind. To say that his thought processes were clouded by a lack of sleep would be an understatement.

So, after getting him calmed down a bit, I asked for the name of the deceased. At first he refused to tell me the name, simply stating that it wasn’t there…it didn’t save. I suggested he humor me and give me the name. Once he did, I did a quick search for the name and there was the record…or I should say records. There were twelve of them! I now believe he was STABBING the save button!

The issue was that he hadn’t entered the ‘Date of Death.’ A very important item to remember. The system is built to organize Current and Past records by the date of death. You can set the number of days that a record is current but without the date of death, that record will go to the end of the list of all records. That’s where the brainless computer comes in. It’s doing exactly what it’s been told and that’s to check the date of death to determine which list it’s on. No date of death? I’ll put it at the end of the list. Remember the green bologna?

That funeral director was so upset with himself and so embarrassed that he apologized over and over for bothering me so late at night. I felt so bad for him that I couldn’t bring myself to bill him for the Emergency Support call. I couldn’t kick the poor man when he was down! We’ve been in contact ever since and are quite good friends now.

I guess my point is if by chance you enter a record and it ‘disappears,’ go to ‘All Records’ in the IMS, enter the last name of the deceased in the search field and I’m sure you’ll find that record. You can then enter the date of death, the record will show in the current or past records list, and you can sit back and say, “Stupid computer!” 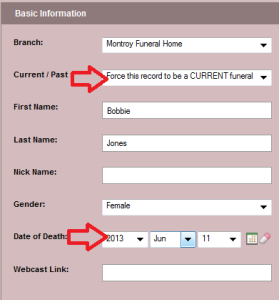 If it’s one of those extremely rare situations where you don’t have a date of death, in the record there’s a field labeled ‘Current/Past.’ There is a drop down option that let’s you set the record to ‘Automatic’ where your current listings’ settings decide where the record should be. There’s also the option to ‘Force to be current’ which will put the record on your Current Services list until you change the setting or ‘Force to be past’ which I believe is pretty self explanatory.

Another very important item to remember regarding records, and something that you should drill into your staff so they know as well, is to never, ever, ever delete a record.  Ever! If by chance a record for the deceased has been entered twice, just un-publish one of them. If there are messages that have been submitted through the Book of Memories and you delete that record, you’re deleting the messages as well and they are very difficult, if not impossible to get back. If you un-publish one of the records, it will come off the live site and we’ll be able to transfer any condolences, or stories, or photos to the published record.

Lastly, if you make a mistake or something doesn’t appear to be doing what it should, relax for a moment and think about the steps you’ve just gone through. Chances are you’ll spot the problem.

If you have any further questions regarding this or anything else in your system, you can always contact us at support@frontrunner360.com and we’ll be happy to help.

Now, I’ve got to go make a bologna sandwich and check the water temperature in the lake. Right after I cut a hole in the ice.

Mark started with FrontRunner in 2010 and most of our clients know him as the ‘go-to’ guy for support. He spends his day helping with any and all issues. Being the oldest member of the FrontRunner team, he’s often referred to as “Gramps” – a title he holds in very high esteem.